Travel
‘Travel’ by Edna St Vincent Millay is the current poem displayed on Platform 1 of Belper Railway station, the only site on Beth’s Poetry Trail where the poem is changed from time to time. Edna St. Vincent Millay was an American poet and playwright. She received the Pulitzer Prize for Poetry in 1923, the third woman to win the award for poetry, and was also known for her feminist activism. 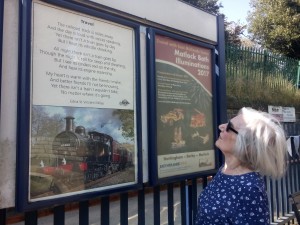 Previous poems displayed on Platform 1 have been:

Beth came to Belper by train as her late husband had worked for British Railways for many years and rail travel was always her first choice.